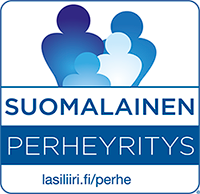 The Finnish Family Business logo is a logo for members of the Finnish Association of Family Businesses. The brand symbolizes profitable growth, perseverance, a multi-generational approach and responsibility.

Erik Liiri from Riihimäki worked at the window glass factory during the day as a glass cutter and in the evenings and on weekends Erik worked hard on glass installations on construction sites. At the same time, Niilo Lähteenmäki was a salesman in a hardware store in Riihimäki. The active men got to know each other about the work and decided together to start an activity that would provide window repair services and building glazing for the residents of the surrounding areas. Thus, in 1962, the men founded a joint venture called Liiri & Lähteenmäki Oy. Suitable premises for the movement were found in Riihimäki’s Power Curve, where three Garages were conveniently located together at street level. In addition to window repairs and building glazing, there was soon a demand for interior mirrors and edge-cut glass, which were supplied to construction and furniture stores.

A few years after founding the company, Niilo Lähteenmäki left the company, moved to Hyvinkää and set up his own glass shop there. Erik Liiri’s work in Riihimäki was continued by Erik’s son Juhani Liiri, who had been with his father from the beginning. The cooperation between the father and the son went well – the days together often lasted long and the weekends went to work.

OWN PREMISES ARE EXPANDED

The company’s operations grew and developed rapidly. In 1974, the first semi-automatic glass cutting table was acquired. Previously, glass cutting had been done with a hand rope using a wooden linear, but now with the new investment, it was also possible to handle larger glass sizes. In 1975, the first handmade production of insulating glass began. There were a lot of competitors, but Erik Liir’s goal from the beginning had been to invest in quality and fast delivery – it was adhered to and still believed in.

In 1985, Lasiliiri Oy underwent its first generational change and Anna and Juhani Liiri took over the management of the company.

Major investments were made in 1986 with the purchase of the first machines for the production of insulating glass on the premises, which led the company to start industrial production of insulating glass. To this end, training was provided in Germany and continuous quality control was carried out – and it paid off: two years later, in 1988, Lasiliiri Oy’s insulating glass was awarded the SFS quality label. With the quality label obtained, the glasses could also be delivered to demanding and large sites in the future. The start of industrial production of special glass increased the number of deliveries, the customer base and the entire organization.

In 1988, the company acquired the company’s first computer-based cutting machine. This facilitated glass handling and reduced the amount of waste glass. At the same time, operations as a whole began to turn into a more industrial production facility: installation activities continued, but now the main focus was on industrial manufacturing. In 1997, Lasiliiri Oy launched the Arctic Glass brand of insulating glass. Our own brand differentiated the products from those of its competitors and strengthened its position in the market for insulating glass.

In 2000, Anna and Juhani Liiri were awarded Entrepreneurs of the Year in Riihimäki: The company’s development had been taken into account and a long entrepreneurial career was valued. In addition, in 2004 Juhani Liiri was chosen as the glass builder of the year. Rewarding and paying attention in the glass market added a sense of appreciation for the work. The second generation change of the family business also took place in 2004, and Ari Liiri and Anu Talja started to lead the company.

NEW HALL TO MEET THE NEEDS OF THE GLASS INDUSTRY

In 2006, the company moved to new premises on Lepistöntie, which were built according to their own needs from the beginning: The floor structures were made to withstand a lot of weight, the hall was made high to allow large glass sheets to be moved and the production processes and machines were dimensioned. A fully automatic glass warehouse and an automatic cutting and completely new insulating glass line were acquired for the new premises. The new premises were expanded for the first time in 2008. The expansion went well, even though in the changing weather of the autumn, the hall was used to work on a press wall alone. The expansion made it possible to include new machines and thus also new products in the range. The new acquisitions were major investments – the courage and understanding required of the financiers. However, the acquisition of new equipment further automated operations and increased the company’s efficiency.

When moving on Lepistöntie, the glass business, which was involved in the business from the beginning, was abandoned. A strategic decision was made: in the future, the main focus was on industrial operations. The business now consisted of the manufacture of insulating glass, the cutting of laminated glass and flat glass, and the grinding and machining of glass. The goal was to grow as a glass processor and this was achieved by gradually expanding the product range.

In 2007, Ari Liiri and Anu Talja received the provincial entrepreneur award. The award meant a lot to young entrepreneurs, and with it, the prestige for doing one’s own business and growing a business was further strengthened. And the company continued to grow: the production of tempered glass began a year later. This required substantial investment as well as learning a completely new production process. In 2009, Lasiliiri Oy was awarded the ISO 9001 quality certificate – which made it easier for customers to confirm the quality of their products and operations, as the background was now audited and inspected annually by an outsider.

STRONG FAITH IN THE FUTURE

In 2010, the company acquired a fire glass saw and began sawing and selling fire glass manufactured by AGC. The strategic decision to expand our operations as a supplier of safety glass was further confirmed. In 2016, the decision to strengthen its operations as a diversified glass supplier gained further momentum when the company acquired the EVA lamination line and started manufacturing laminated glass. The EVA film launched on the market enabled completely new solutions compared to traditional PVB lamination. The company found a machine that made it possible to laminate EVA films and immediately saw an opportunity to stand out from traditional laminators. So we took the opportunity to be among the first to start laminating with EVA film. This acquisition also enabled the launch of smart glass products.

Lasiliiri Oy’s journey has been long and its growth rate fast. Hard work, bold solutions, clear goals and shared dreams have come a long way. There are still new goals for the future and still hard work. The goal is to be the leading manufacturer of safety glass and smart glasses in Finland in the future.